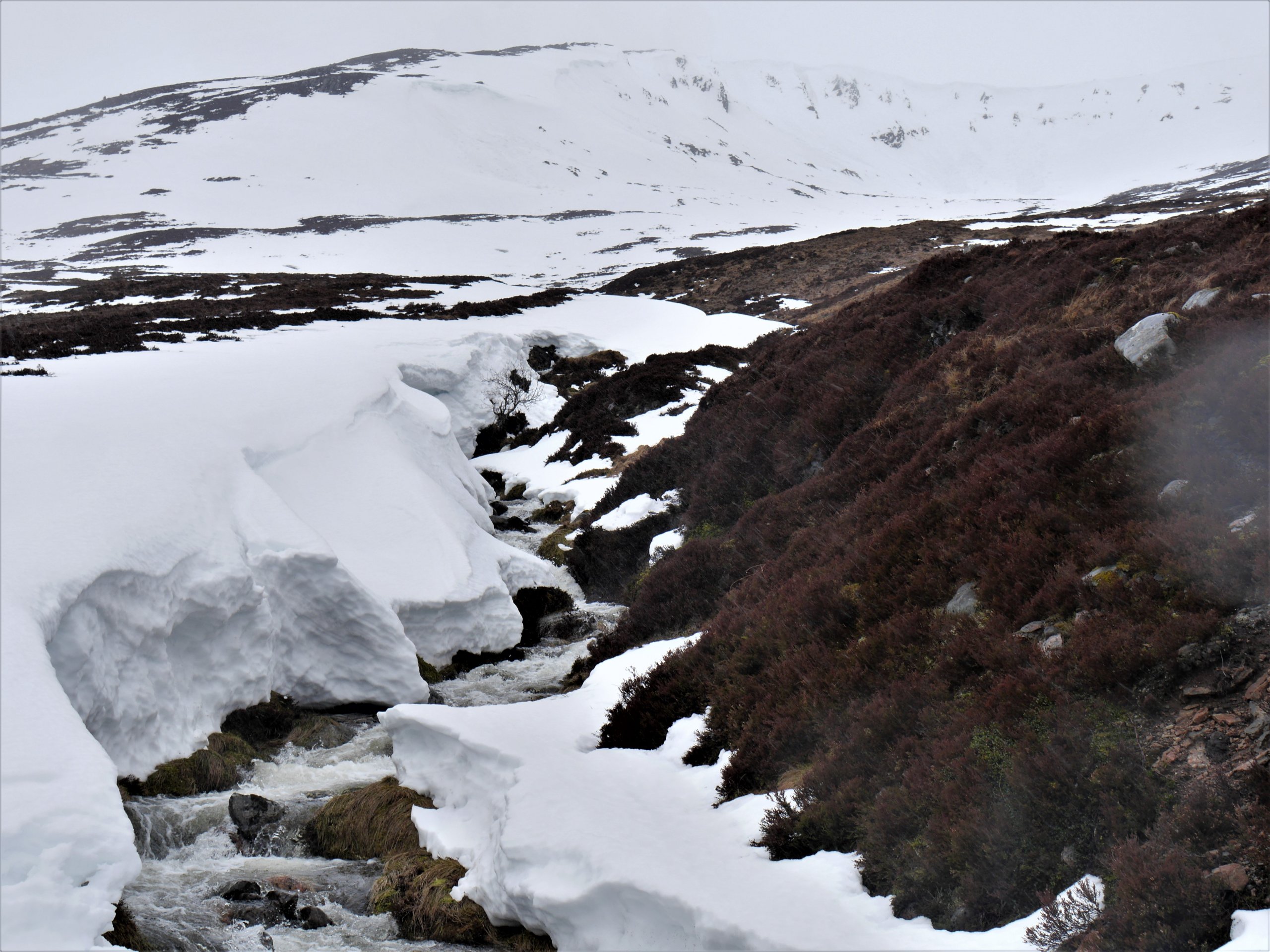 (Above) A sodden walk into Coire Dubh today. Thoroughly miserable conditions with rain throughout the morning and not a hint of new snow until much later.

(Above) Cornice collapse observed here this morning – right of centre of the photo – with wet snow instability also an issue on these steep generally E facing crags. The skyline is at about 900m. Cooler conditions later in the day will have crisped up the upper reaches of these and similar places. 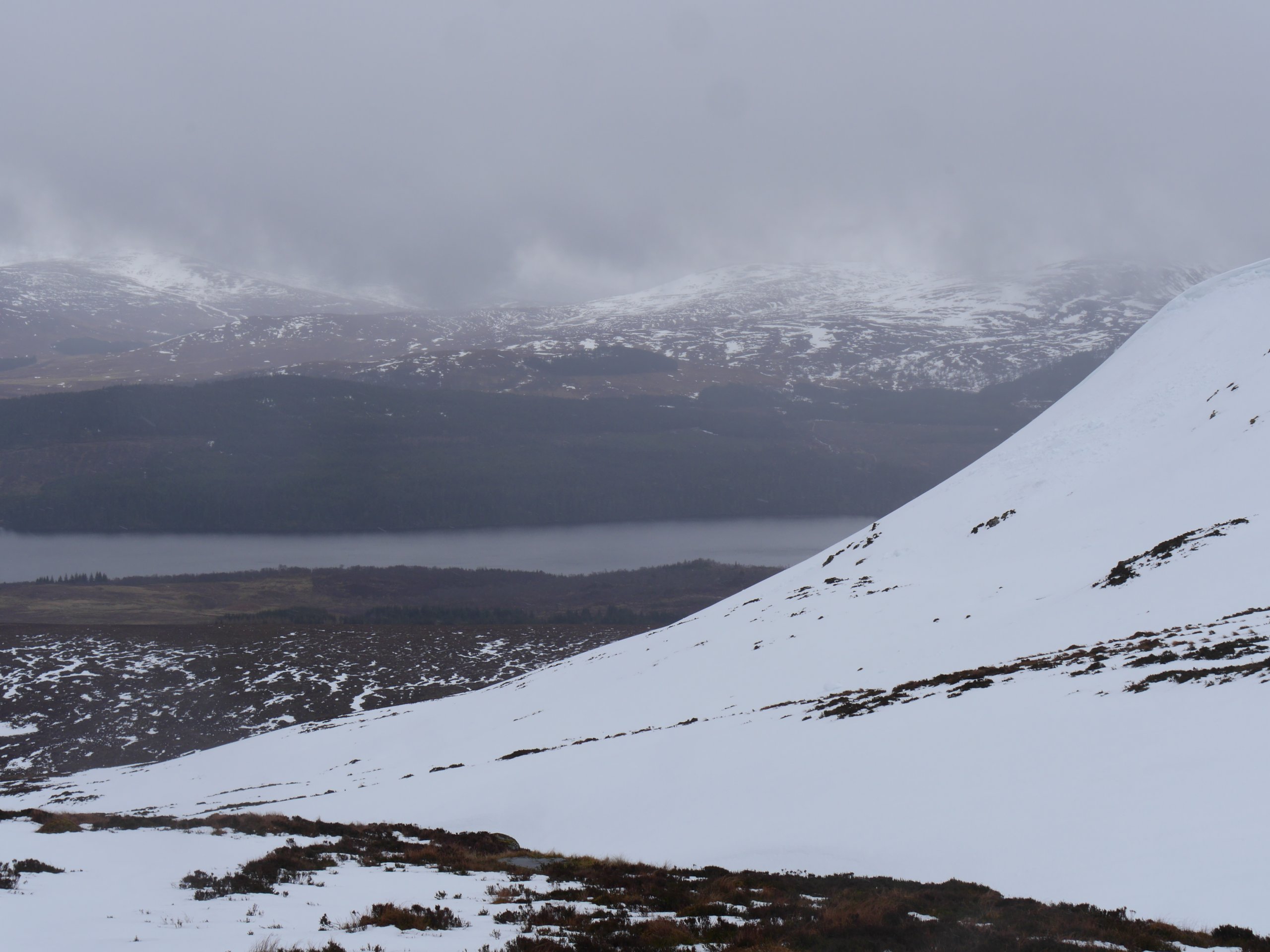 (Above) Looking down through leaden skies to Loch Laggan from Coire Dubh. Sodden overhead and underfoot conditions the flavour of the day today.

The Met Office provide us with remarkably accurate and detailed weather forecasts for each of the SAIS areas. Although they’re able to bring to bear HUGE computing power to weather modelling they still have issues with the exact track of shower activity. They’re occasionally candid enough to mention this in the info they send us – which is good – but it can leave us with a bit of uncertainty when formulating the avalanche forecast for the next day. Tomorrow is a case in point. 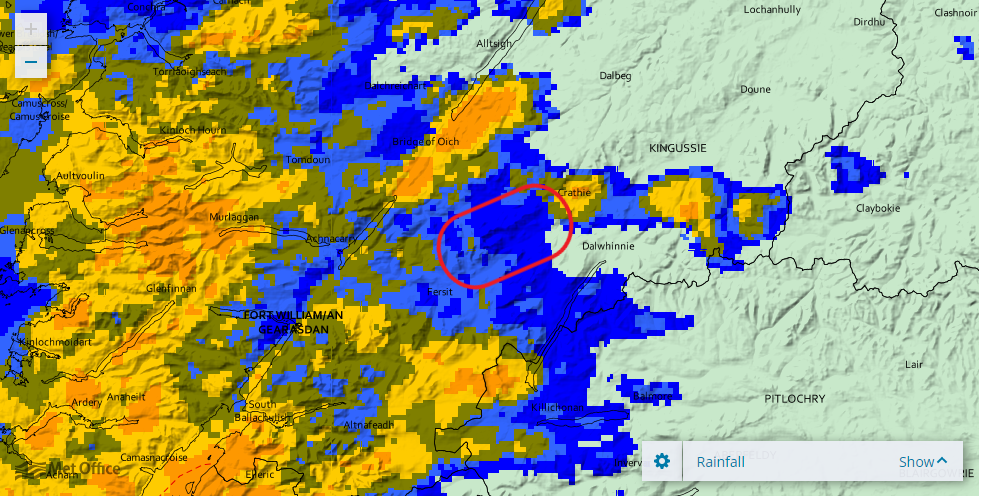 (Above) A screen shot of what might be termed ‘more organised’ precipitation approaching the Creag Meagaidh area, moving eastwards in this instance. If you look carefully you’ll be able to make out the distinctive shape of Coire Ardair and the Moy Coire inside the marked area. Precipitation in this format, often frontal in character, is considerably easier for the Met Office to forecast, including hour-by-hour timing and precipitation intensity. 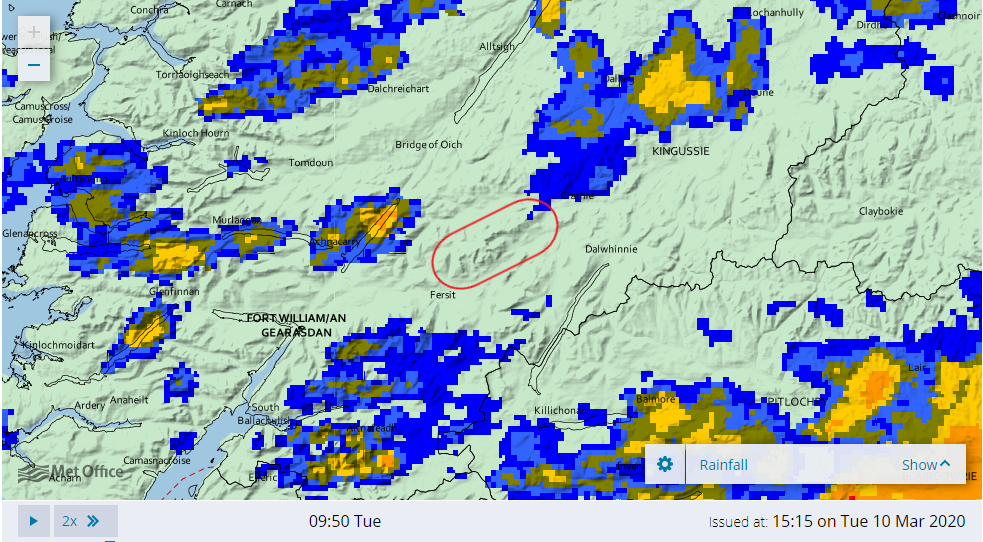 (Above) Easier to make out the distinctive features of Â the SAIS Creag Meagaidh area in this image, including the elongated whaleback of the Carn Liath plateau, and Beinn a Chaorainn & Beinn Teallach. Radar screenshot of shower activity today, moving west to east. As you can see, shower activity is a bit ‘hit or miss’. You may get a lot or not very much at all. Estimating accurately the track of these unstable cells of moist and turbulent air is still a bit of a lottery for the Met Office forecasters. We had snow showers in tomorrow’s forecast for Creag Meagaidh along with a little cryptic note added by the duty forecaster, thus, ‘Winds/temperature graphs good guidance. Frequency and intensity of showers more uncertain.’Â

Bottom line for you guys is that if we get a fair amount of snow you may need to re-calibrate the avalanche forecast upwards. Or downwards, if we get less snow.