A fantastic winter’s day. The camera was out a lot today, many photos were taken (I suspect this would be the case for most people who were out today). Below is a selection of what was observed in Coire Ardair today. 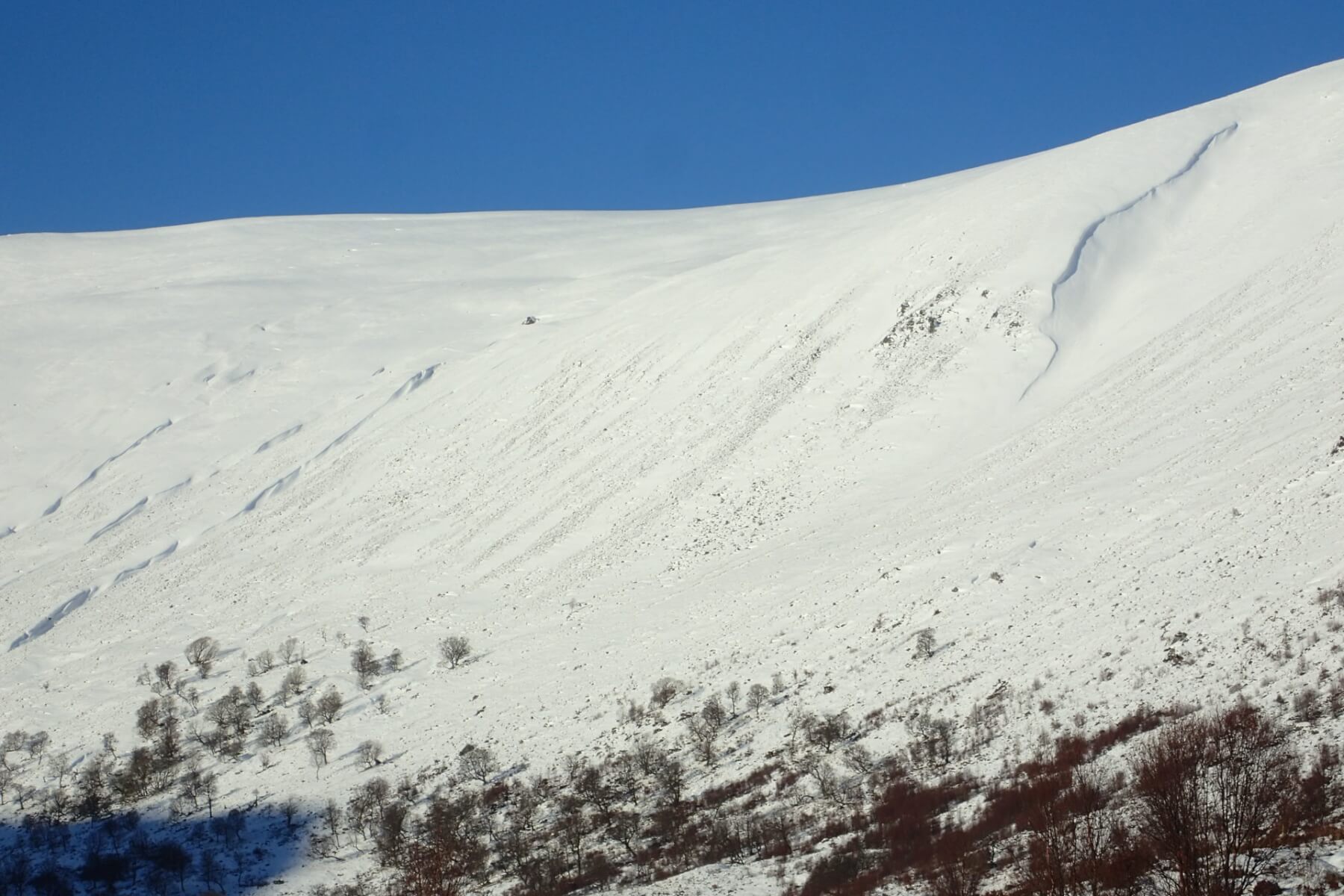 A Southerly aspect with good examples of cross loading in Balloon Gully (top right of the shot) and a couple of small watercourse gullies on the left. 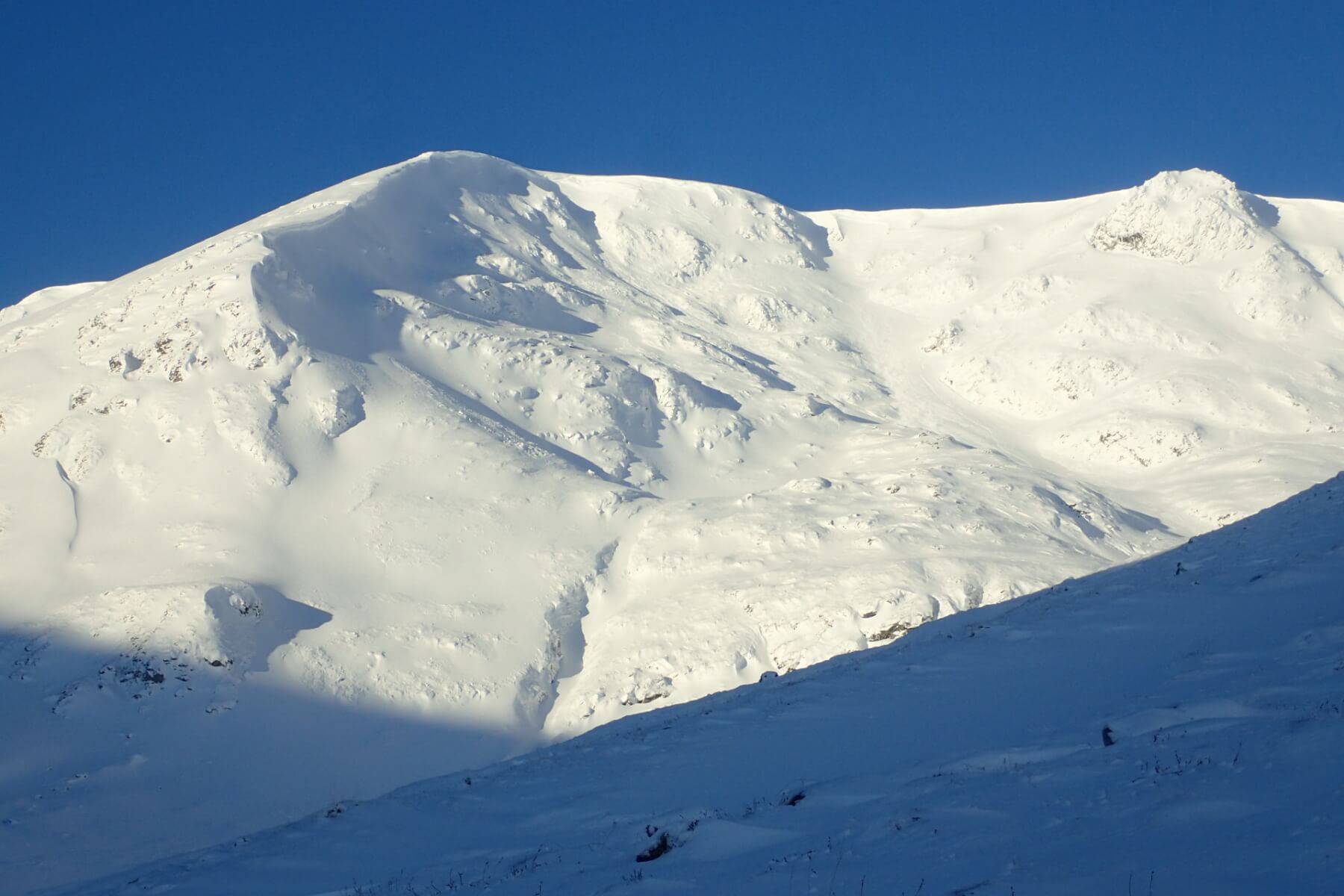 Coire a’Chriochairein. Hard to make out as that bit of the picture is slightly over-exposed but there is debris in the gully at the back. The cornices on the left however stand out clearly. 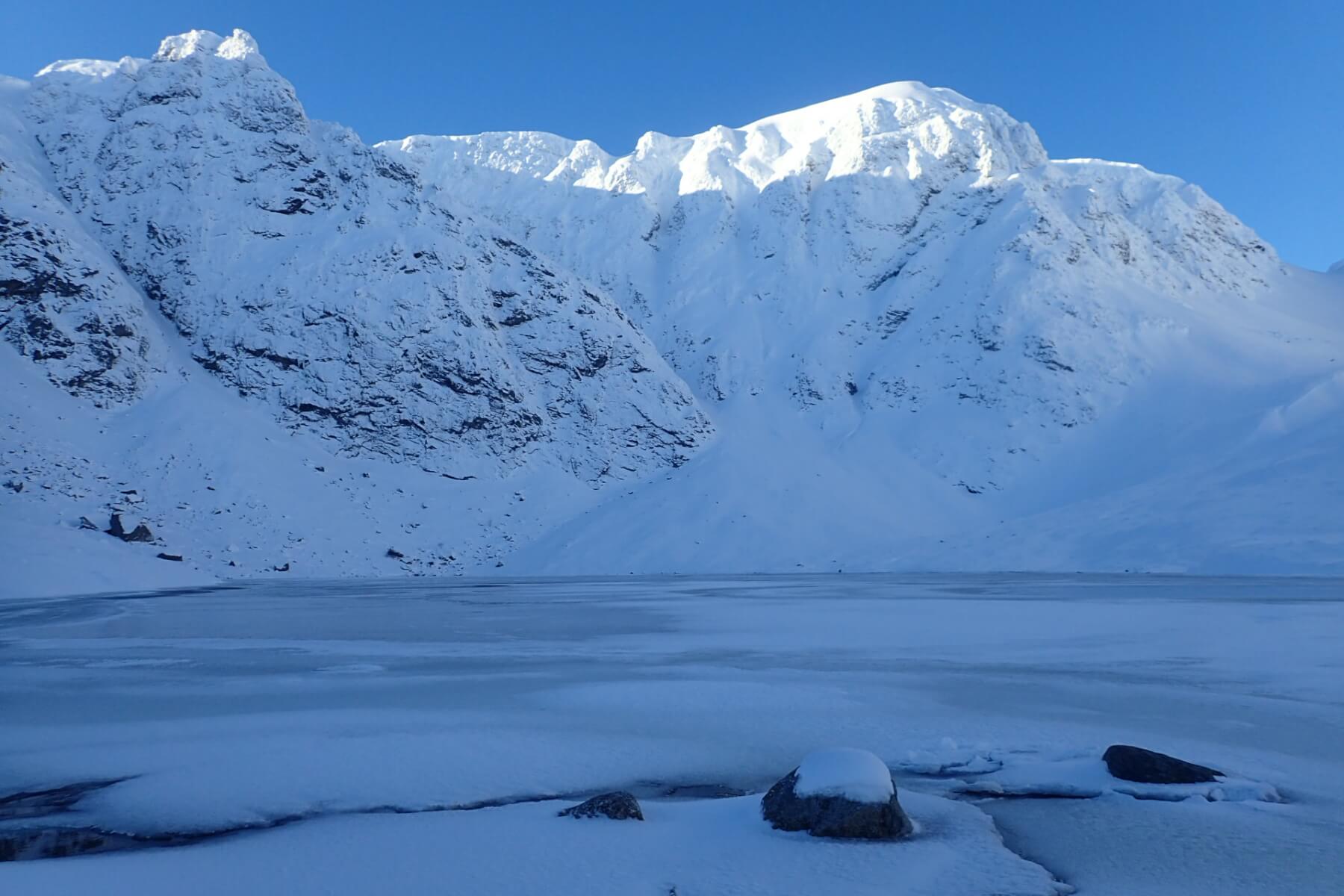 Pinnacle Buttress and the Post Face are holding a lot of snow at the moment. 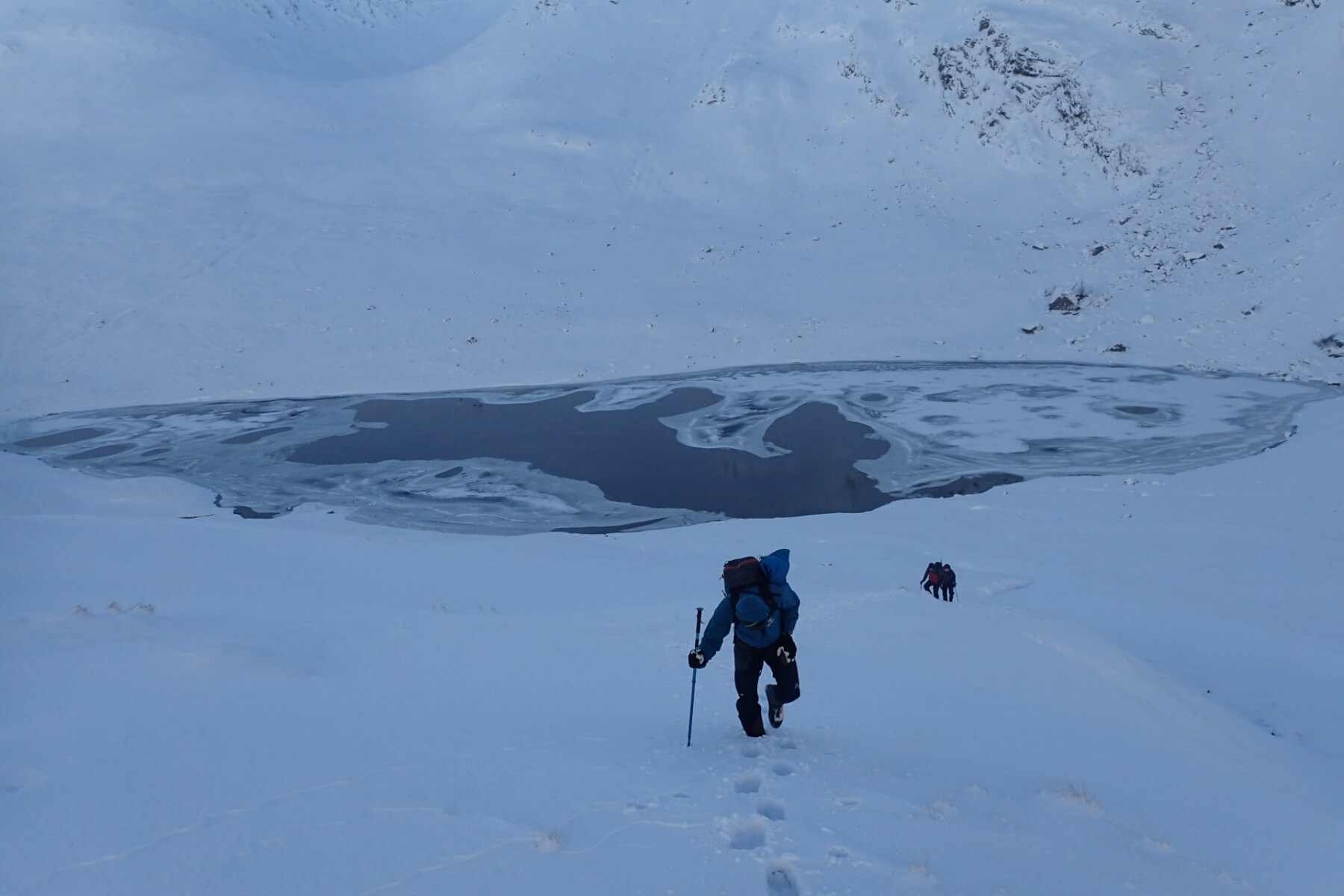 It was quite hard going on foot in the deep snow. Fortunately someone had already put in a track which was much appreciated. 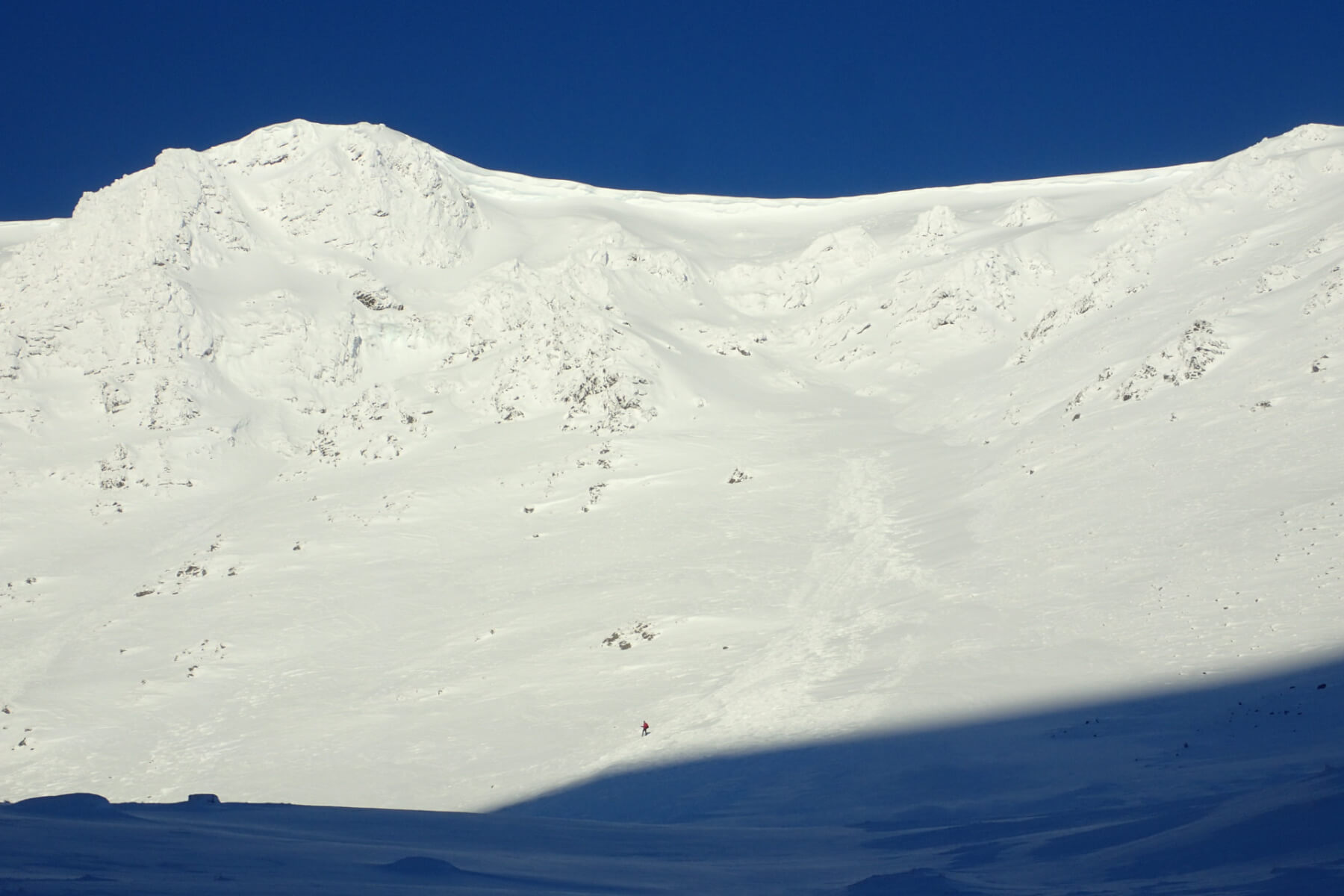 Avalanche debris (just to the right of the figure in the sunshine) from Stob Poite Coire Ardair. Hard to tell exatly when this came down. Some substantial cornices remaining at the top (compare the size of the section at the top left with that of the significantly closer figure). 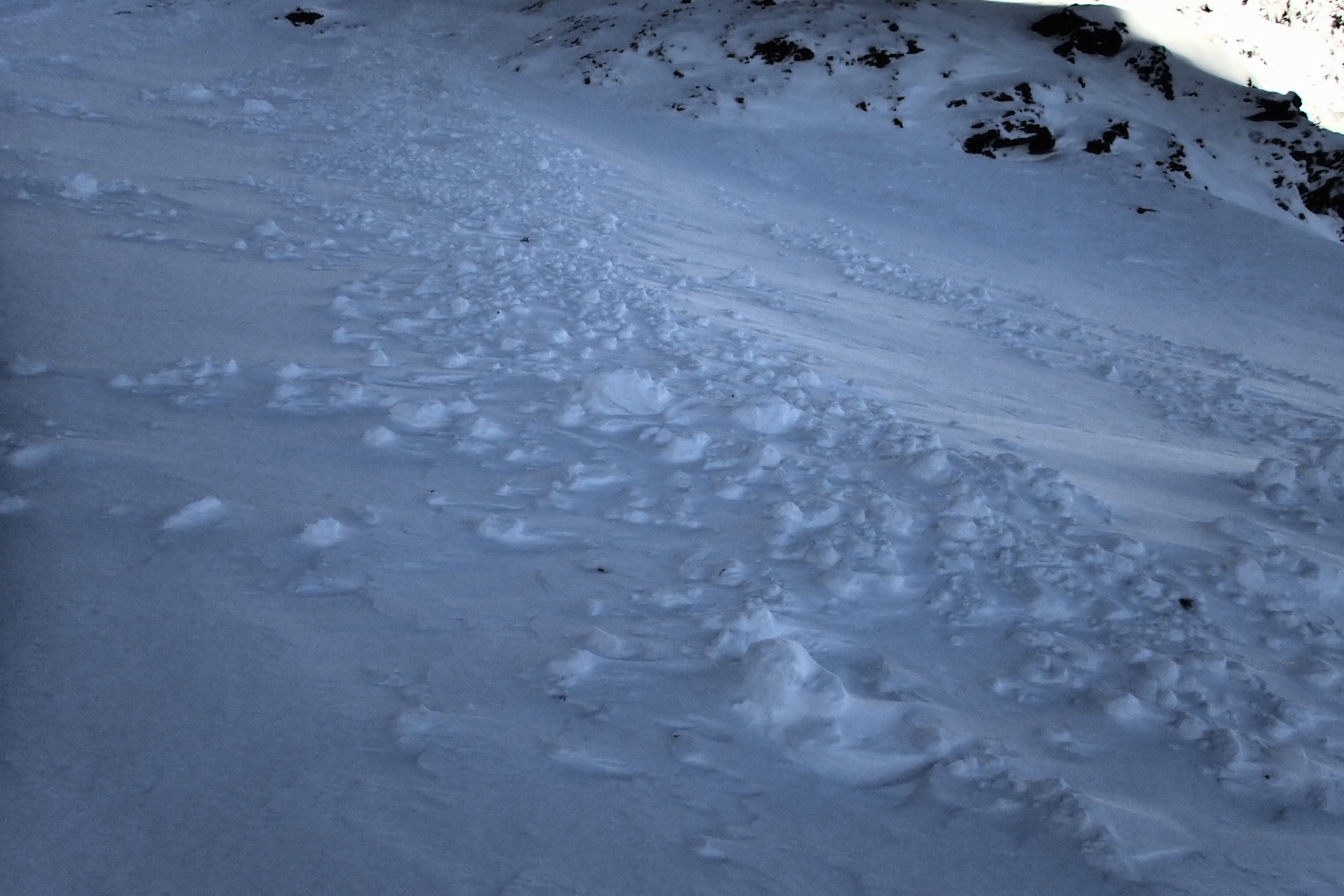 Debris from another avalanche from Stob Poite Coire Ardair. 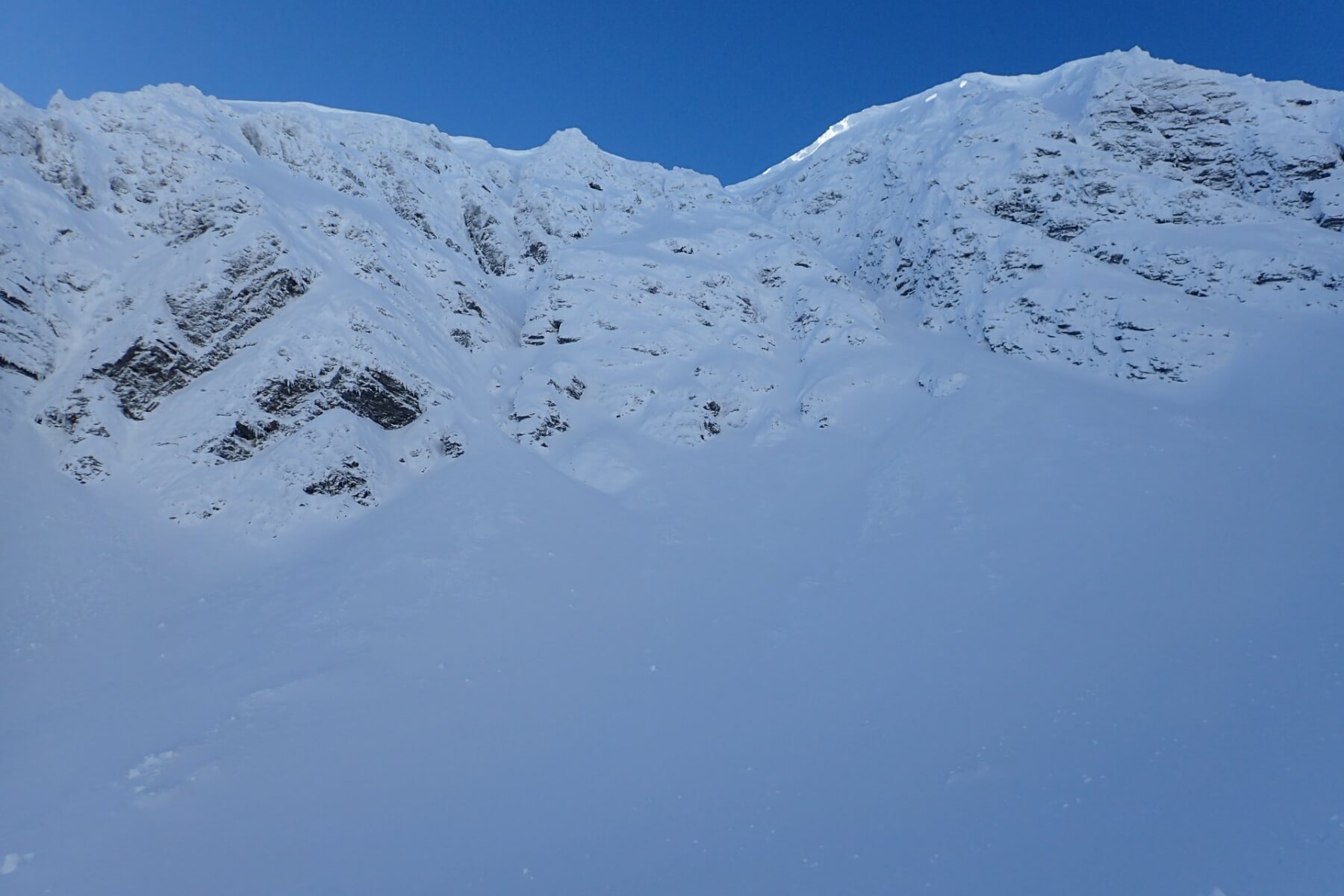 The Inner Coire Routes. Notice the size of the snow cones from the two gullies centre left and centre right of the photo. These are formed by many sluffs and avalanches over the past few weeks, and will have built up to a significant depth. 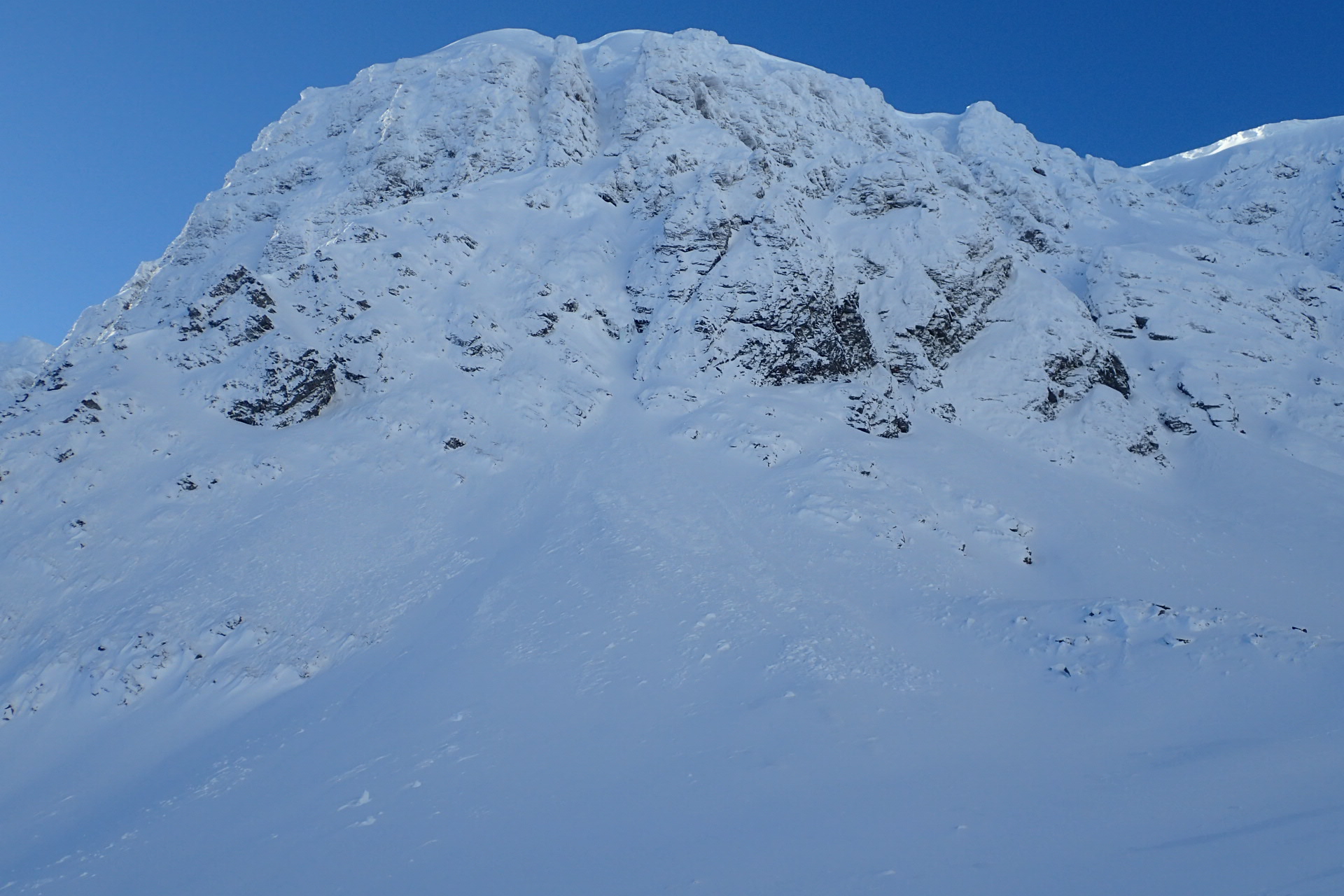 Looking up towards North and South Pipe. More debris of an unknown age (past couple of days) visible below the gully in the centre. 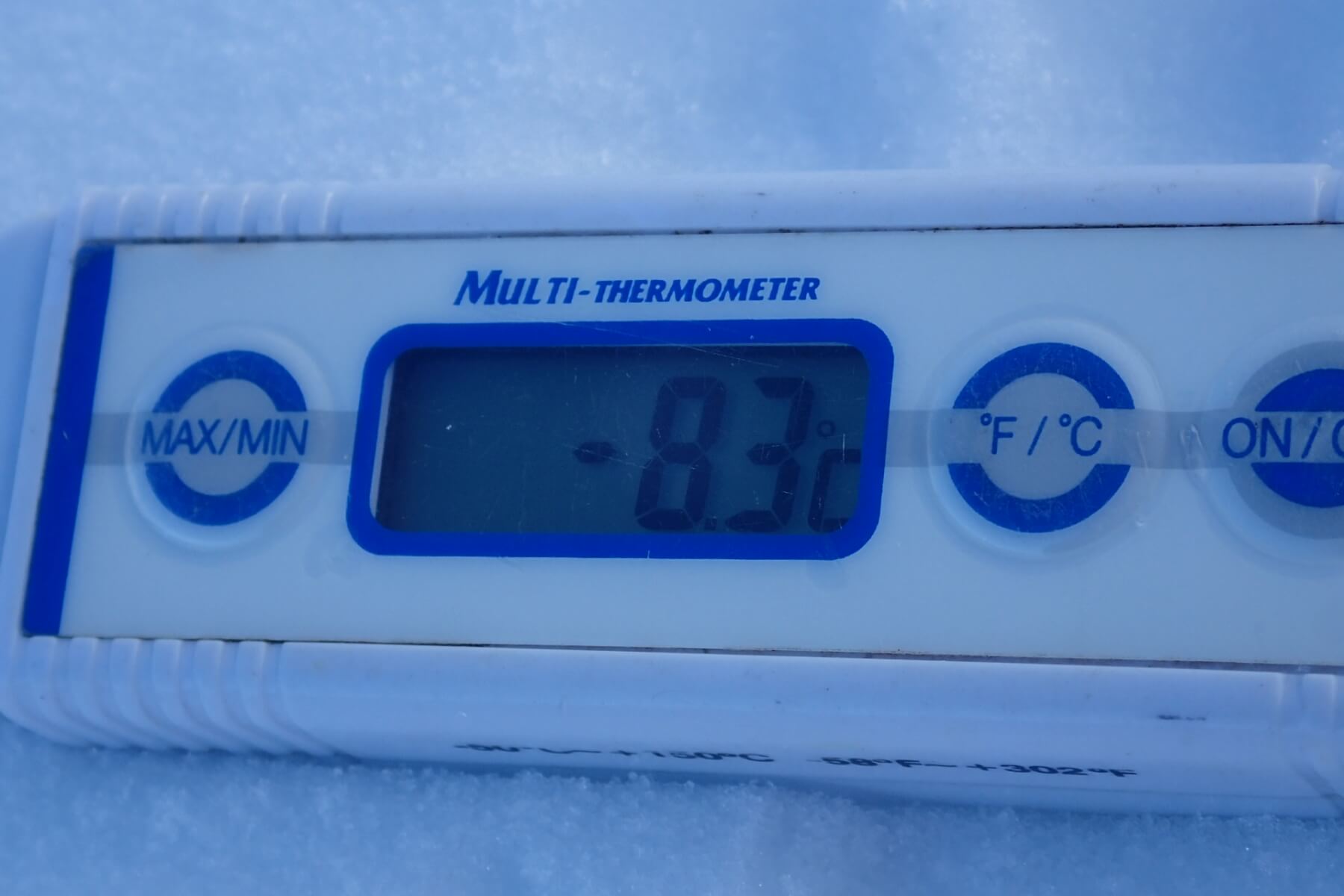 The snow surface was cold, around 5 degree Celsius lower than the air temperature. This was due to radiative cooling under clear skies last night. Despite the cold snow surface there was little in the way of surface hoar formation. The exception to that was close to the loch where the air had evidently been slightly more humid, the vapour source being the not yet frozen parts of the loch, and some very small surface hoar crystals were visible. 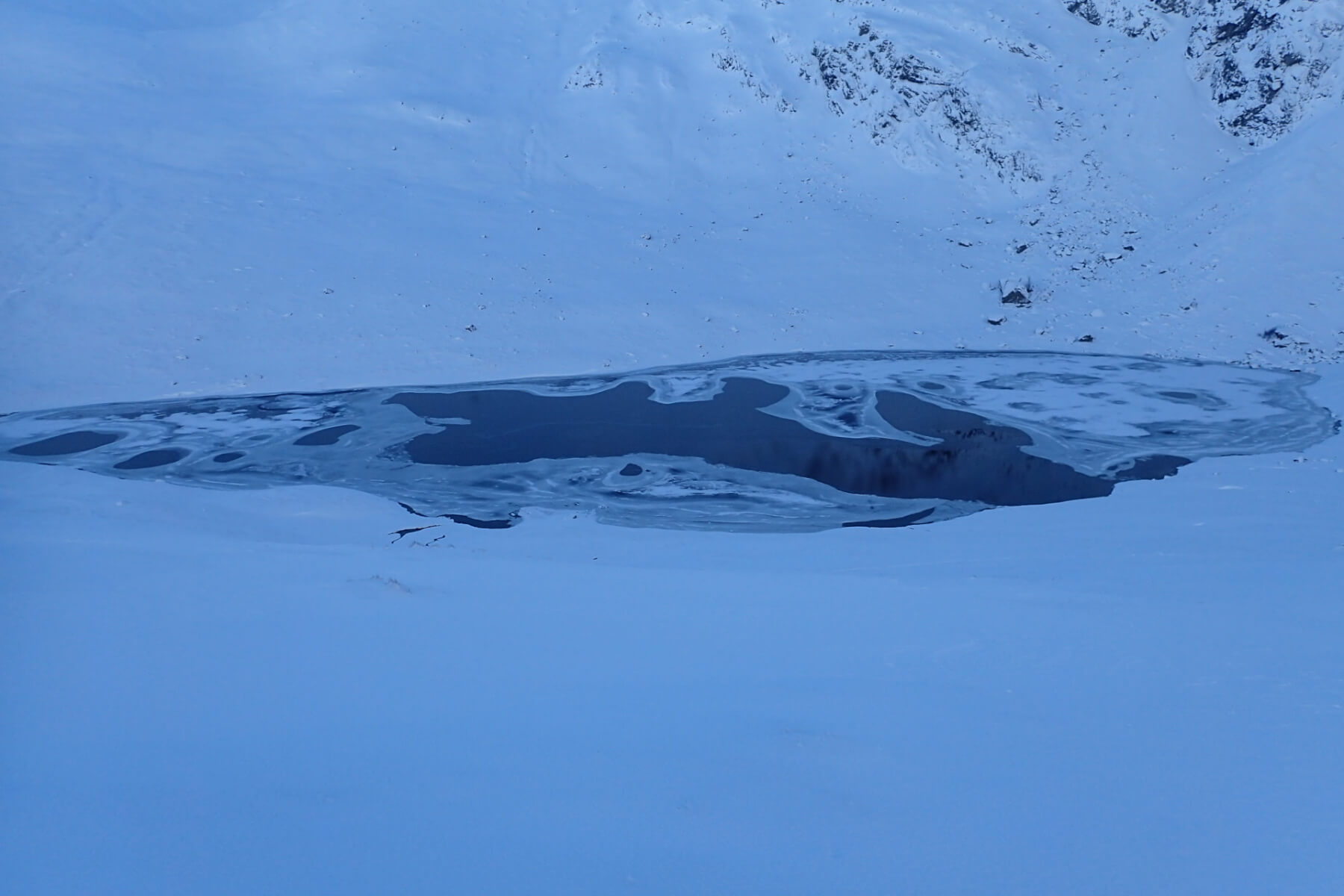 I really like the patterns of snow, ice and water on the Coire Ardair Loch at an altitude of 620 metres. Why did it (partially) freeze like that, and why is it that this wee loch about 500 metres long has been so reluctant to freeze.  If you look at the blog posts for the 2nd and 3rd of January this loch looks just about frozen while the Spey Reservoir (altitude 275 metre and almost 2km long) looked well frozen. I did not check the Spey Reservoir today, but the likes of Loch Morlich (altitude 300 m, 1.5 km long) over the Cairngorms looks to be well frozen at the moment. The actual processes of a loch freezing is more complex than a lot of people initially assume, perhaps something to explore in a future blog post. 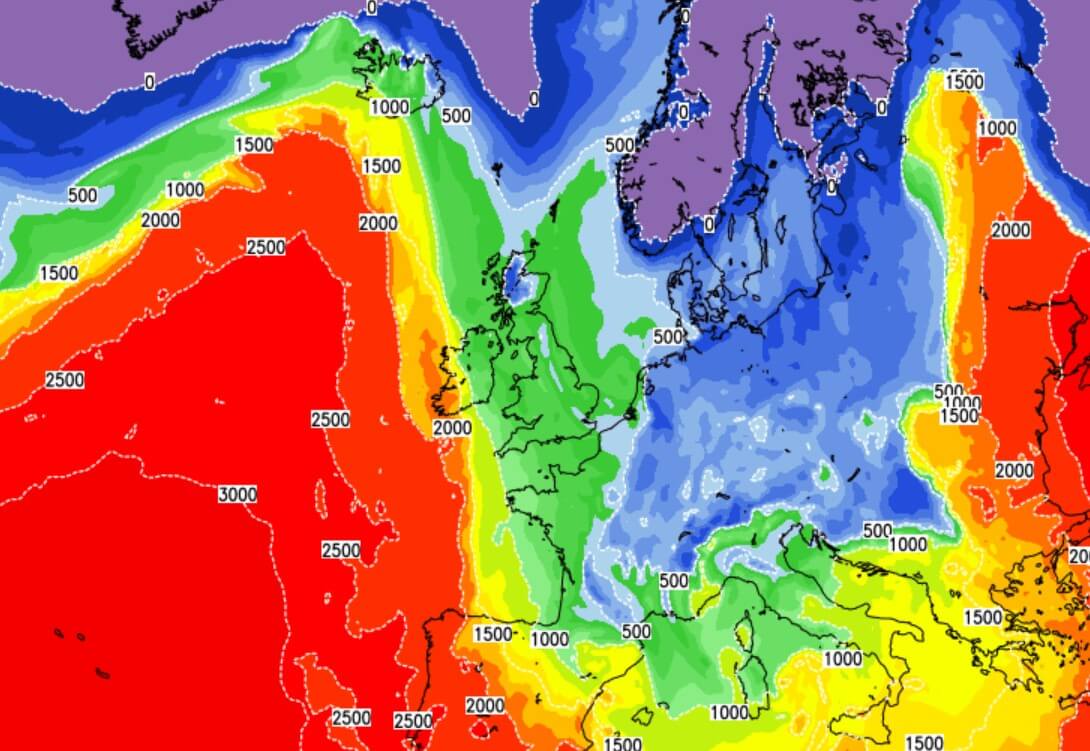 Now for something less aesthetically pleasing than patterns of ice on a loch. The zero degree isotherm for midday today. Scotland remains in the cold air, but the warm damp air over the Atlantic approaches, and is already into the West of Ireland. Tomorrow’s weather is expected to be very different to today’s with the mild air arriving, the freezing level going above the summits and some light rain falling. This is going to have a negative effect of the stability of the cornices observed today.