Sugary snow is not so sweet. 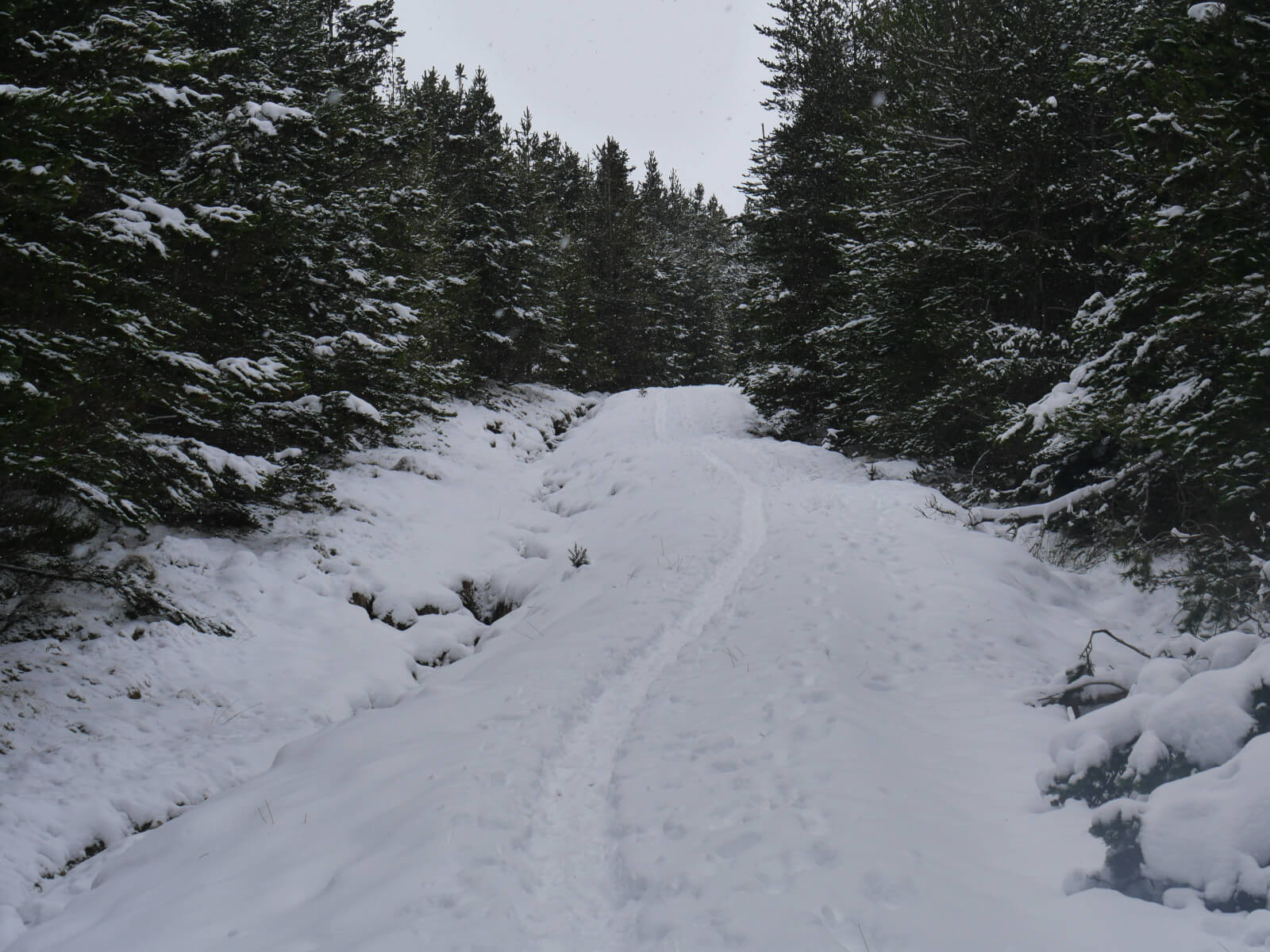 (Above) The last part of the approach track through the forest to Beinn a Chaorainn. Skinning from 470m today. The tranquility of the forest belied the wintry day ahead! 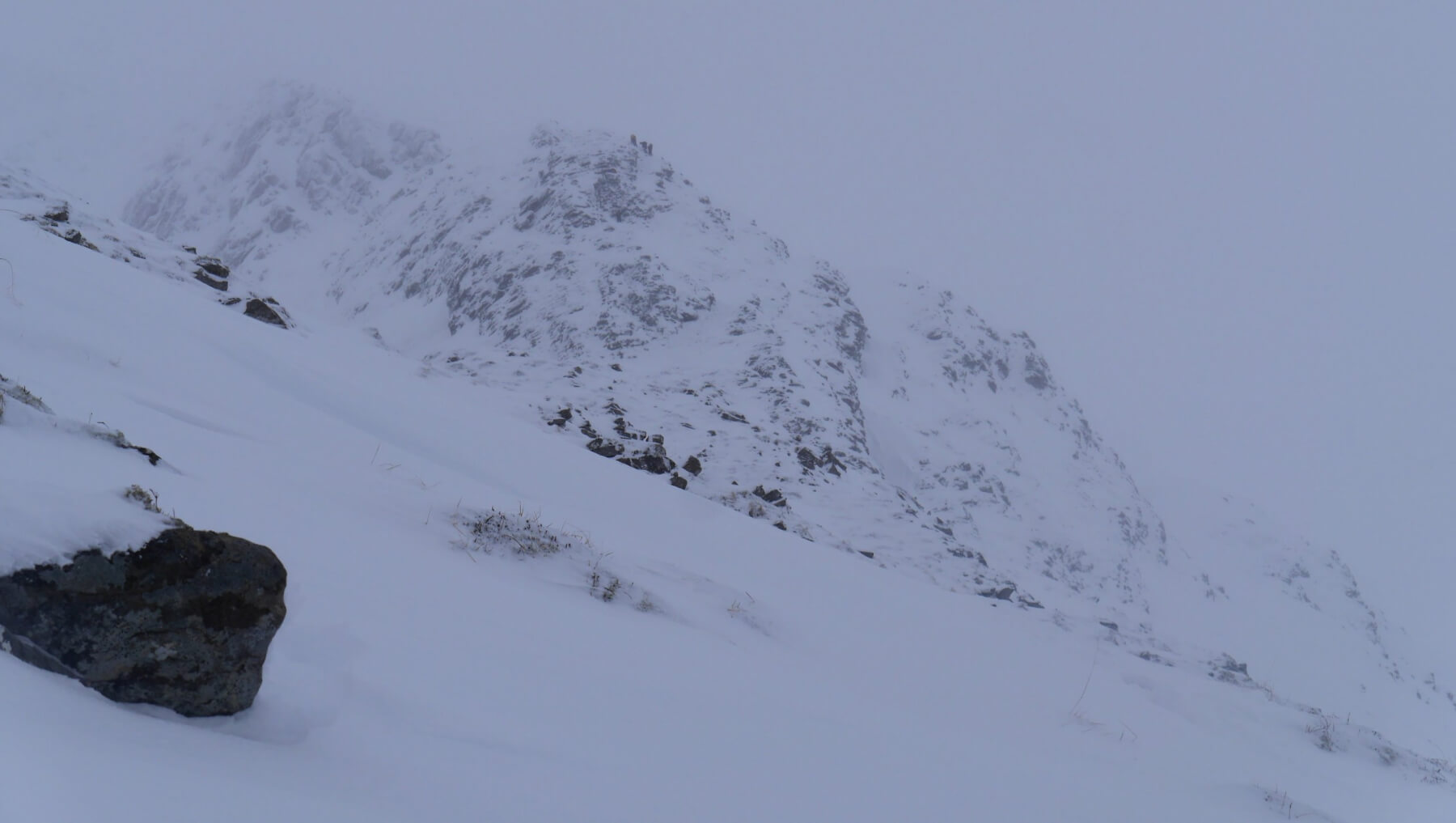 (Above) A view towards the start of the East Ridge of Beinn a Chaorainn. Counted a total of six ascentionists enjoying ‘full Scottish conditions’ on the ridge. Quite blowy with snow showers throughout the morning and drifting above 650m in the NW airflow.

Complicated picture of instability today – and for tomorrow, Wednesday, too. The persistent cold temperatures have induced the growth of ‘sugary’-like crystals, or facetted grains, lower in the snowpack. These layers – and there’s more than one – tend not to support the upper layers at all well and collapse, or shear, quite readily. During field tests, I got easier releases today in somewhat thinner new windslab than in the older, deeper windslab formed over the past few days. The deeper stuff is definitely of some concern though. These sugary crystals tend to persist in the snowpack so they’ll be giving us forecasting headaches for the next few days or so.  If you’re going to be out and about in the mountains then conservative route choice is advised. Check the formal report/forecast for guidance. 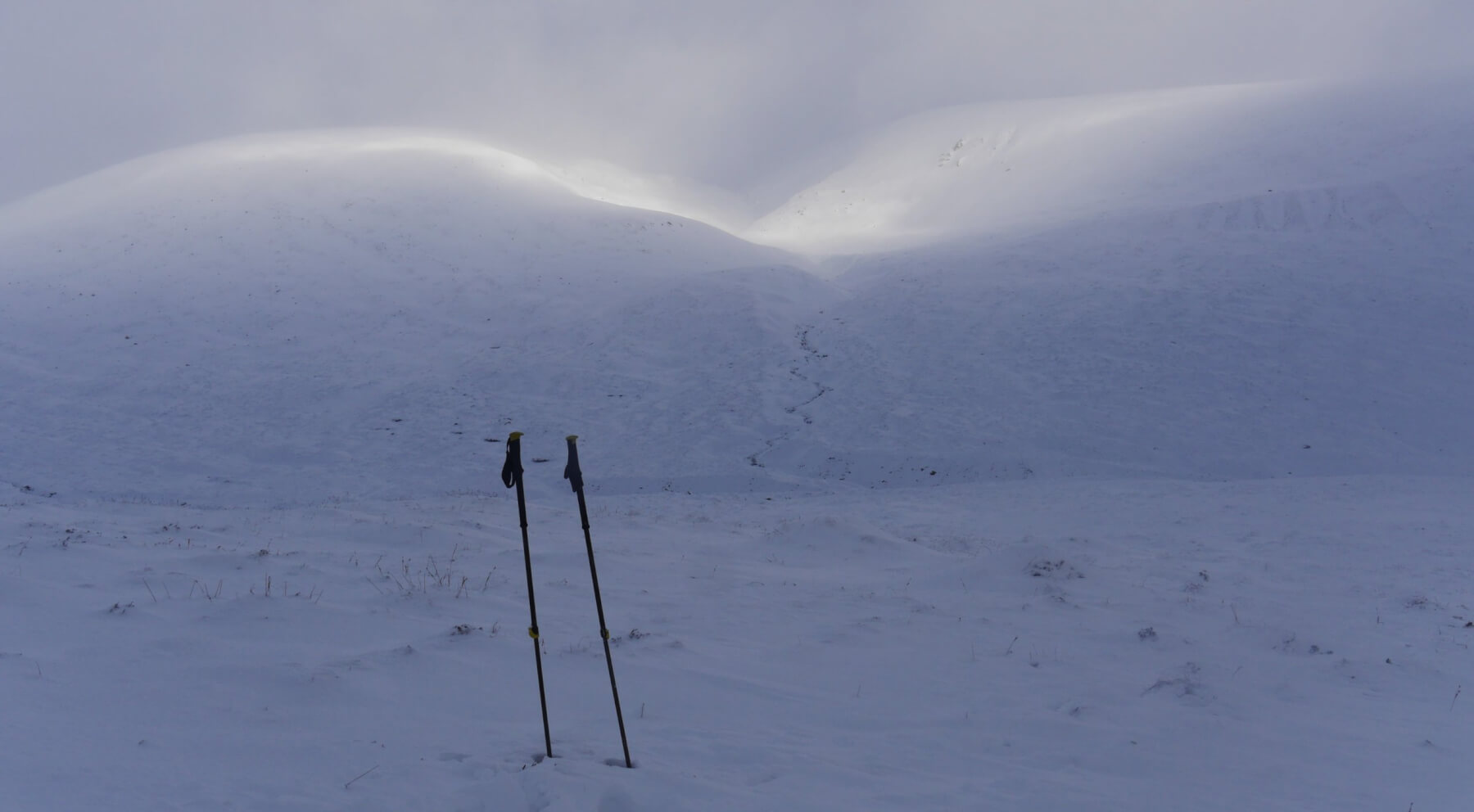 (Above) A shaft of light pierces the wintry gloom. Looking over to Coire nan Laogh when in retreat from Beinn a Chaorainn. Quite a wild and remote spot on our patch. Definitely feels a bit ‘out there’.  When easterly winds blow, SAIS Creag Meagaidh forecasters are drawn to that bleak and unwelcoming place for a look at one of our very, very few avalanche-prone west aspects.

(Above) Looking over towards the Grey Coires, with the pyramidal peak of Stob Ban prominent. The weather cheered up on the homeward leg in the afternoon. Typical! Judging by today’s SAIS Glencoe blog posting, places further west had a bit of ‘candyfloss and postcards’ weather, at least for a few hours. 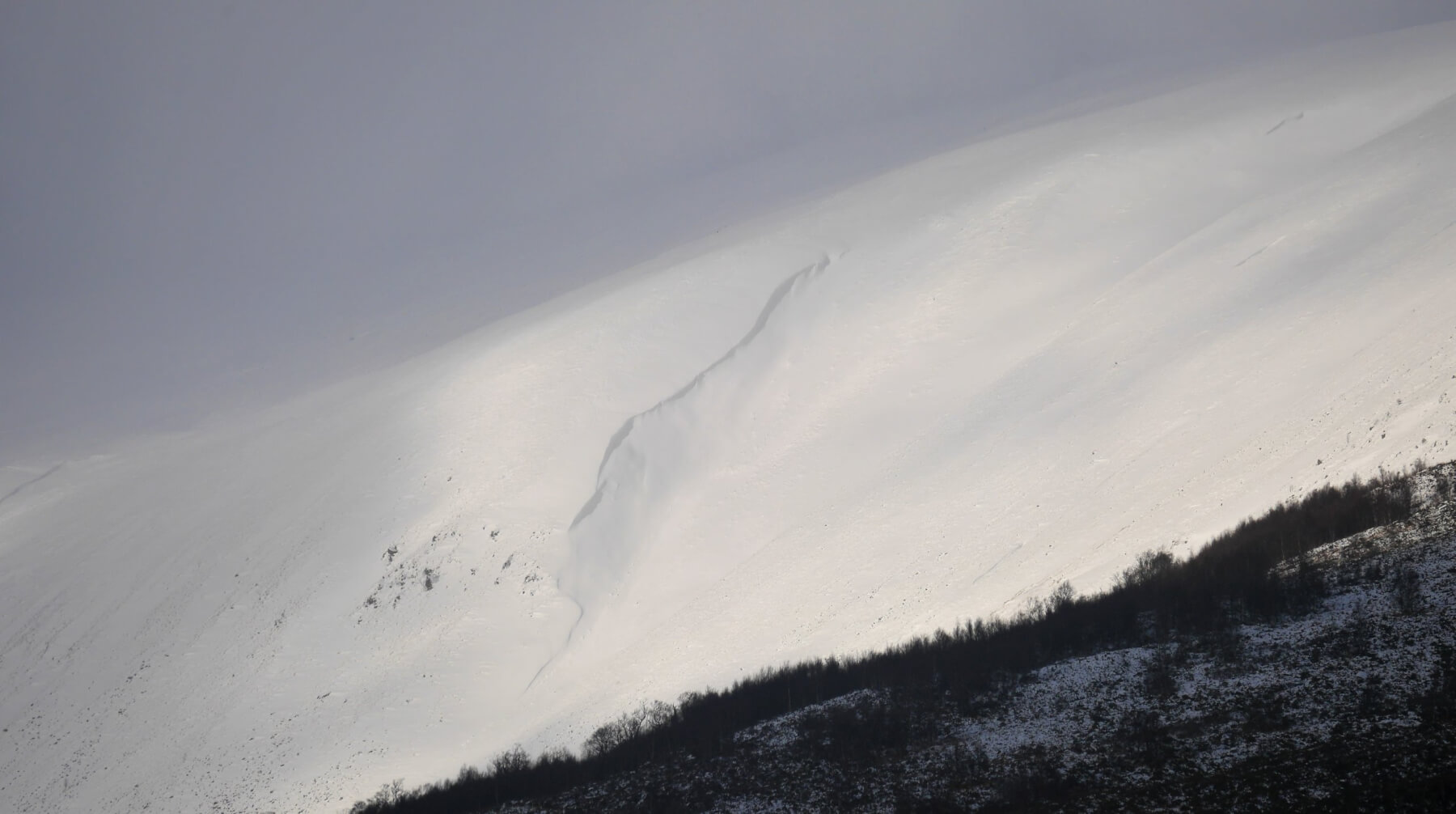 (Above) Stopped in the Aberarder car park to snatch a shot of Balloon Gully, which is actually a shallow re-entrant carved into the sidewall of Coire Ardair. It often catches quite a lot of snow (and produces avalanches), and today – for the first time this season – had a cornice over the length of it. Its location is shown on the map extract below.

(Above) L to R The Creag Mhor ridge and the bulk of Sron a Ghoire as viewed from just east of Kinlochlaggan today. Quite a wintry scene. 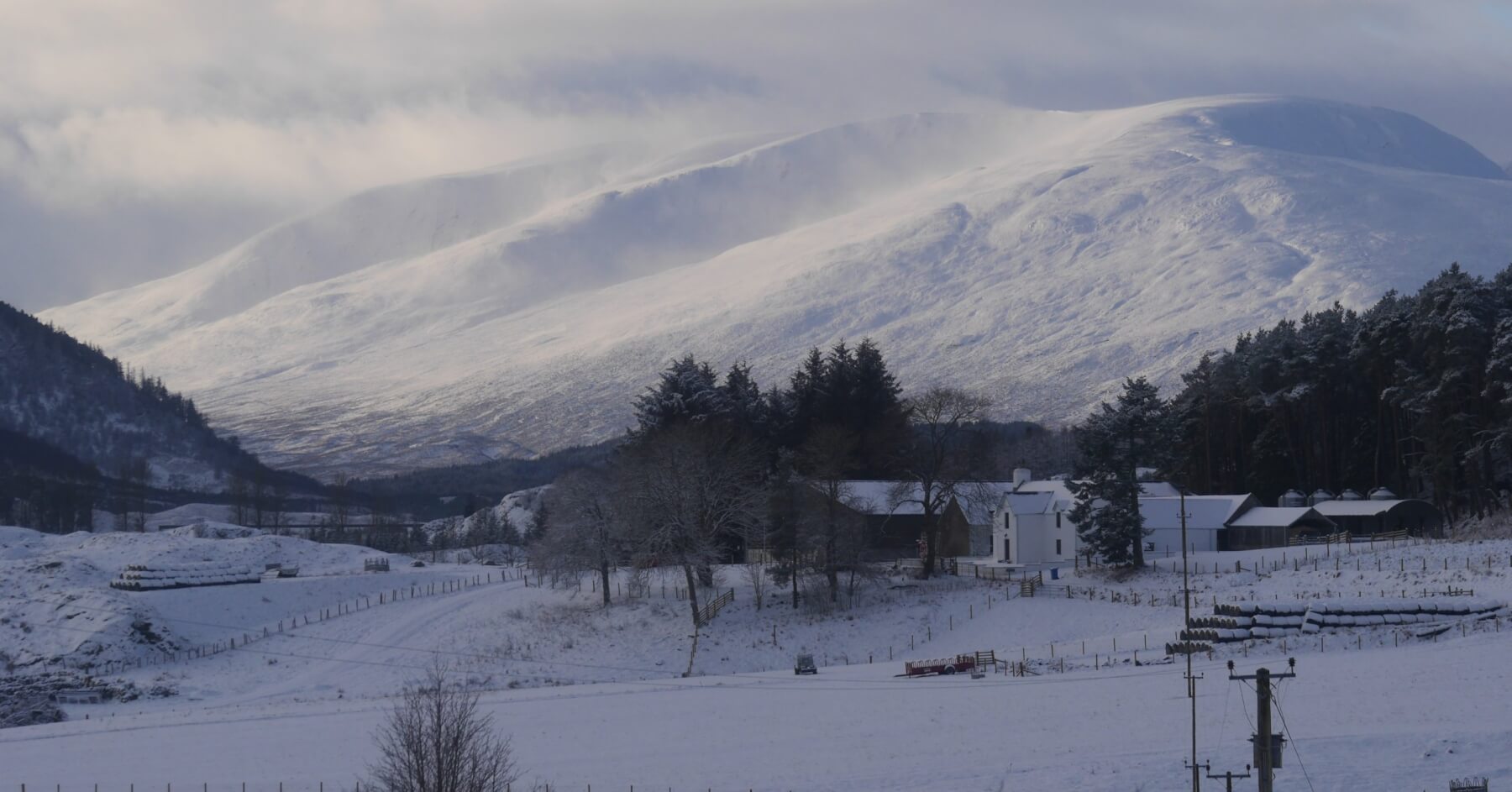